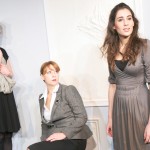 Elisabeth Dahl as The Mother

Tilly Fortune as The Secretary

Lara Lemon as The Student

The first stage revival of Sylvia Plath’s only play.  Three diverse women explore the complex joys and agonies of childbirth, seeking a greater universal truth about the human condition.

Written in 1962 and first performed on the BBC Third Programme with a cast including the legendary British screen star Jill Balcon, Three Women charts the experiences of three pregnant women, each with a very different story to tell.  Written at the height of her poetic powers, Three Women abounds with Plath’s trademark extraordinary poetic images and prefigures the final explosion of her talent in Ariel.

“Sylvia Plath’s Three Women is a stunning piece of writing about pregnancy and childbirth, spiky, teeming with extraordinary metaphors, tapping into a feminine experience one sees and hears so rarely. This first-class production… is both powerful and compelling. Director Robert Shaw rightly allows Plath’s writing to be the star of the show, introducing some subtle movement and other decisions, but never distracting from the words. This is a highly impressive performance of a text that is richly poetic and, despite its radio-play origins, one that should be seen, not least because it still feels fresh and new and radical to hear women talking frankly about motherhood and their body.” – THE STAGE (William McEvoy)

“…director Robert Shaw can claim to have a coup on his hands … Shaw’s lucid, uncluttered staging makes the case for the work’s spellbinding qualities … exquisite.” – TELEGRAPH (Dominic Cavendish)

“The Three Women … illuminate their situations in verse packed with Plath’s trademark startling imagery… Best of all is Lara Lemon as a student forced to give her child up for adoption. Lemon beautifully suggests a young woman of reined-in vitality and experiences far beyond her years, for whom carefree joy will always be tinged with sadness… A suitably reflective start to the year’s theatre.” – EVENING STANDARD (Fiona Mountford)

“Robert Shaw’s direction is thoughtful and perfect … this is a high-class production of a very classy work by the poet who sadly died too young to fulfil her potential.” – REMOTE GOAT (Aline Waites)

“… as raw and vulnerable as a new born baby, and as painfully beautiful and awe-inspiring as the process of child birth itself … It is wonderful that this neglected work is finally on display … a well acted and strongly directed version of a ground shaking and soul breaking text … a show worth going to experience … Plath’s forgotten masterpiece will completely carry you away.” – PUBLIC REVIEWS

“The performances are strong and Tilly Fortune’s portrayal of the second woman stands out in particular. Her reflections on her miscarriages demonstrate an ability to delve into the true emotions of the text and the experiences it evokes. She moves swiftly and with great skill from humorous and sarcastic comments about her job and the ‘flat’ men in the office to revealing the heartache she is really feeling… The writing itself is a tapestry of painful memories and poignant observations about life and the condition that all three women share. The verse sweeps you into a world of inevitability and helplessness which is undeniably moving.” – WHAT’S ON STAGE

“…intimate, luminous and fearless in its imagery…” – THE STAGE

“Shaw’s direction highlights the solitary voices of these women as they negotiate dreams and terrors about pregnancy and motherhood.” – METRO (Claire Allfree)