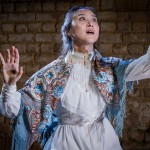 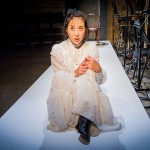 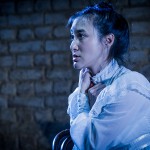 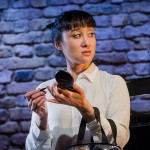 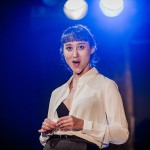 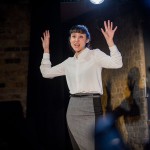 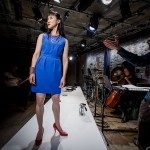 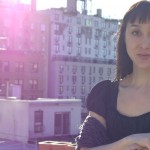 The Wanton Sublime by Tarik O’Regan, libretto by Anna Rabinowitz (European premiere)
The Medium by Peter Maxwell Davies, libretto by the composer

“Hai-Ting Chinn has it all: breathtaking beauty, poise, comic timing and a voice of pure gold.” David Cote, Time Out New York

Inside Intelligence is proud to conclude its 20th anniversary season at the Arcola with the European premiere of The Wanton Sublime by twice Grammy-nominated composer Tarik O’Regan (Heart of Darkness) with a libretto by New York’s award-winning feminist poet Anna Rabinowitz (Darkling). This ground-breaking electro-acoustic work for mezzo-soprano and chamber ensemble explores the human and mythic aspects of the Virgin Mary, who struggles to retain her flesh and blood identity in the face of external forces intent on symbolising her as the ideal woman.

A one-act operatic thriller for an unaccompanied singer, The Medium is Peter Maxwell Davies’ most extraordinary and daring work.

“This adventurous double bill offers an invigorating and rewarding experience of rare quality. It is also a showcase for Hai-Ting Chinn, a remarkable singer of contemporary music in the tradition of Cathy Berberian and Jane Manning.  The music is rather wonderful, weaving a richly melismatic vocal line into a strikingly coloured orchestral score delicately enhanced by electronic effects. Never sterile or mechanical, it seems to have a living organic pulse.  Superb playing by the Orpheus Sinfonia conducted by Andrew Griffiths and Hai-Ting Chinn’s utterly committed performance deliver the highest level of excellence.”  (Rupert Christiansen, The Daily Telegraph)

“O’Regan colours the drama with pre-recorded vocal episodes and long melodic lines broken by punchy chords, and it never fails to grip. What a thrilling composer he is; this is vital, compelling music. As for Chinn, the singer who created the role at its American premiere, her dramatic engagement is as striking as her firm, committed voice.  Robert Shaw’s commendably simple staging presents her as a power-dressed young professional who changes midway through into simpler clothes that better assert her individuality. It’s a subtle transition, and beautifully judged.”  (Mark Valencia, WhatsOnStage.com)

Tarik O’Regan is a twice GRAMMY-nominated contemporary classical music composer.  Projects coming to fruition in 2016/17 include the DVD release of Mata Hari, a full-length ballet commissioned by the Dutch National Ballet, and a new album of orchestral music recorded by the Hallé Orchestra.  Currently, he is working on a full-scale opera commissioned by Houston Grand Opera for 2019.

Hai-Ting Chinn was a lead performer in the 2012-2014 world tour of Philip Glass’ and Robert Wilson’s expressionist masterpiece Einstein on the Beach. In 2009, she played the lead in The Wooster Group’s critically acclaimed production of Cavalli’s opera La Didone.

The Wanton Sublime was commissioned and developed in New York by American Opera Projects.

The Wanton Sublime is supported using public funding by the National Lottery through Arts Council England.