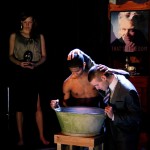 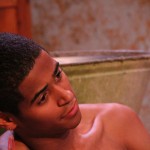 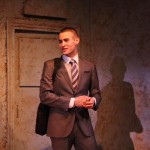 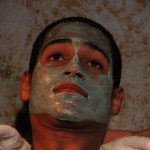 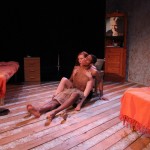 “People don’t really accept chickens. Which is wrong, ‘cos we invented the pecking order.”

“When I’m inside a woman, I feel like I’m not a chicken. I at least feel like a rooster.”

DANNY and LYLE were abandoned by their mother in the chicken coop aged 12 and 10. Discovered after several months, they were taken into care. Over the years, they’ve become media celebrities. Sultry TV journo PRU has entered their lives.

We meet them in their mid 20s. It’s New Year’s Eve. Tomorrow they must leave care and step out into the world alone for the first time. But are childhood traumas coming home to roost? What’s PRU hatching? Why is she egging them on? Will they ever eat KFC again? And of course, which came first?

“…by general agreement, the leading light among stage writers of his generation…” (The Sun Herald, Sydney)

“BRENDAN COWELL has a fresh and distinctive voice, and he approaches familiar subjects – sibling relations, infidelity – from startling and interesting angles.” (The Sunday Age, Melbourne on HAPPY NEW)

“…the sophistication and freshness of the writing: COWELL’s playful-poetic style runs staccato rings around everyday speech, mocking his characters’ clichéd pretensions, while imbuing them with a strange kind of dignity.” (DOMINIC CAVENDISH, The Daily Telegraph, on RABBIT)

“BRENDAN COWELL’s play is refreshingly different. It is so extreme, surreal and emotionally gothic that it is really rather moving.” (LYN GARDNER, The Guardian, on RABBIT)