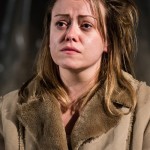 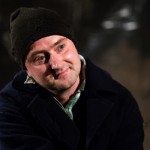 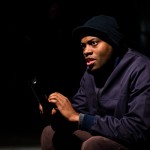 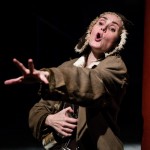 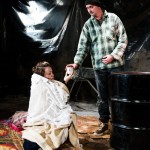 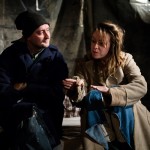 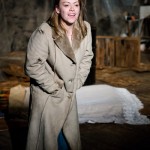 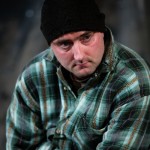 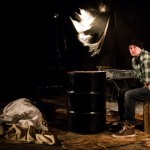 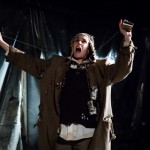 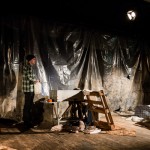 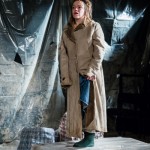 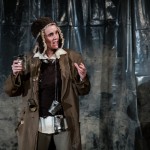 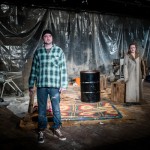 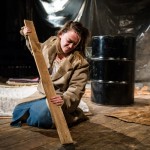 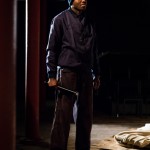 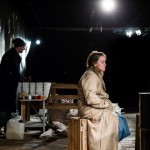 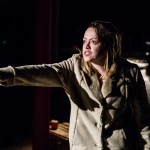 Check out our amazing audience feedback

“Anyone who wants to live has got to change the world.”

The CLF Theatre at the Bussey Building, home every year since 2010 to the Royal Court‘s Theatre Local project, plays host to the UK premiere of this heart-rending Chilean classic, exposing with tenderness, humour and infinite love the devastating effects of Thatcherite economic reforms on a society brutalised by years of the Pinochet dictatorship.

The CLF Theatre is London’s newest and most exciting venue.  In Autumn 2011, it hosted the Royal Court in productions of truth and reconciliation by debbie tucker green and The Westbridge by Rachel De-Lahay.  From July to September 2013, it was the home of the Royal Court‘s exciting Peckham Soap Opera and the National Theatre of Scotland‘s production of David Greig‘s multi-award-winning The Strange Undoing of Prudencia Hart.

‘The play offers a moving image of the desolation created by oppressive regimes. The two enforced vagabonds reminded me of the tragic itinerants in Athol Fugard’s Boesman and Lena. Radrigán also subtly punctures the myth that tyranny is a key to economic success by showing the dismal consequences of a failing business model. And even the idea that society’s victims are united is exposed by the brutal tension between Emilio and Miguel, who were both apprenticed to the same trade. It offers a potent reminder of the dangers of subordinating people to rigid political and economic systems. Shaw’s production is acted with great vigour by Siân Reese-Williams as the ever-hopeful Marta, Dan MacLane as the determinedly cynical Emilio and Offue Okegbe as the security guard fatally divided in his loyalties. A play that at first left me detached by its lack of specificity finally had me in its grip.’
Michael Billington (The Guardian)

‘Juan Radrigán’s Children of Fate demonstrates the humour and love that can survive in the midst of the brutality that can grip those who are struggling to survive. At some point, it becomes a dog-eat-dog society, overtaking humanity and compassion. In the end though it’s a depressing portrayal of a world gone sour.  Reese-Williams is excellent as the generally upbeat Marta, smiling in the face of adversity and loss, but with an underlying vulnerability, her terror never far from the surface. MacLane gives Emilio a laid-back strength. As well as Miguel, the security guard (solidly played by Okegbe), Aurelio, an androgynous, disturbed character wanders into the building. Children of Fate is a thought-provoking play.’
Carole Gordon (whatsonstage.com)

★★★★  ‘Set in a Chile ravaged by the Chicago Boys and the Augusto Pinochet dictatorship, Children Of Fate (Hechos Consumados) goes on to explore life on the margins. Marta (Siân Reese-Williams of Emmerdale renown) and Emilio (Dan MacLane) bear the brunt of society’s ills – homelessness, poverty, unemployment and the scourge of fascism. The dialogue is rooted firmly in working-class vernacular, something translator and director Robert Shaw has been careful to maintain in the English version. The staging is superb. This excellent production exposes the appalling consequences of free-market capitalism.’
James Rodie (The Morning Star)

★★★★  ‘Siân Reese-Williams and Dan Maclane as the two desolate protagonists are simply superb.  Their portrayal is sweet, tenacious and heartbreaking.  Offue Okegbe as Miguel and Julia Tarnoky as Aurelio keep up the standard and do not disappoint.  Tarnoky’s performance, although a fleeting one, made the temperature in the theatre drop; it really left the audience chilled to the bone when hearing the dark omens she brought to the scene. The characters are painfully alive in front of you; thanks to the great production you get a sense of how they were created as a result of the desperation that Radrigán saw in the Chilean people.  These events can be found too often in human history.  The play builds a similarity to the consequences of the Thatcher government in the UK, but talking to the friend that accompanied me to the theatre, we left feeling that more than anything this play is about the hard reality of the present and the dire consequences for the future if we do not take action.  It is a culturally relevant and eye-opening production, but more importantly, a human one.’
(everything-theatre.co.uk)

‘Children of Fate opens with a sense of anticipation. A man huddled next to the remains of a fire in an oil drum, while a body stirs and whimpers under a pile of rags beside him. For an uncomfortably long time, director Robert Shaw has his actors hold this tension, requiring us to wait for something to happen. Here, he neatly captures the emptiness and frustration of the piece’s homeless, poor and disenfranchised characters: sitting around, in the cold, waiting for something to happen to them. Children of Fate encapsulates the powerlessness of poverty – too often, the only certain thing to wait for is death.

‘Juan Radrigán’s incisive piece cracks open some important issues, and asks difficult questions without providing answers. The play shows us the chance relationship between Marta (Siân Reese-Williams), and Emilio (Dan MacLane), after he drags her from a nearby canal, saving her from drowning. Their conversation is interrupted by the bizarre, otherworldly Aurelio (Julia Tarnoky), who – prophet-like – speaks in riddles. We learn a little of what brought Marta and Emilio to the curious, transitional no man’s land in which we find them. Did Marta throw herself into the canal, or was she pushed? What and who has Emilio left behind? Finally, an altercation with disaffected security guard Miguel (Offue Okegbe) brings the piece to a violent conclusion.

‘There are some moments of brilliance in this piece. Siân Reese-Williams’s Marta is sensitively judged and truthfully played. She brings a realistic, vulnerable grubbiness to the character which is immensely satisfying and difficult to achieve. Too often, it is hard to suspend disbelief that a well-cared for, well-kempt actor with a dirtied-down overcoat is homeless, but Reese Williams shows us a Marta who looks like she has been sleeping rough for weeks. This damaged character with her broken, barely-surviving idealism is the strongest thing in this piece, and Reese-Williams gives an exciting, febrile and extremely watchable performance.

‘Translator Robert Shaw also directs and, by and large, he handles the stage well. The characters move restively around the transitional playing space, beautifully and simply designed by Gillian Argo. The simple device of water dripping into buckets at the back of the stage pleasurably evokes the dank, unwelcoming area in which Emilio and Marta set up camp. The wide, bare stretch of stage at the Bussey Building is an excellent choice for the piece. Its stripped-down aesthetic chimes well with the material, and the several homeless people I passed on the short walk from Peckham Rye demonstrate the genuine pertinence of its message.’
Jessica Edwards (ayoungertheatre.com)

‘Important and relevant, this play shows the complex tragedy of what it means to live under a dictatorship. Robert Shaw’s new production is thought-provoking, dark and realistic.’
Caiti Grove (onestoparts.com)